An Interview with debut author, Eric Landfried ~ Win a copy of his Solitary Man 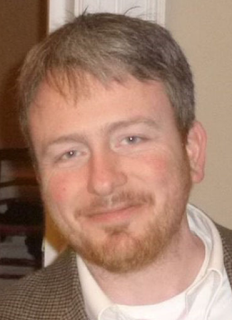 First, the interview: If you had to describe yourself in one sentence, what would you say?

I would say that feels like an extremely difficult task, but I’ll give it a try. There are good adjectives I could use to describe myself (creative, thoughtful, funny, loving) but plenty of bad ones as well (prideful, impatient, fearful, sinful). So instead of turning this into a glowing review of myself, I’ll say that I’m sinful, yet righteous, broken, yet being repaired, unlovable, yet loved beyond comparison, all thanks to the grace and glory of the Lord Jesus Christ.

What do you do when you’re not writing? Any interesting hobbies?

I tend to be a homebody, so most of my hobbies revolve around being able to stay home and be comfortable. I love sitting down with a really good book (currently splitting my time between Fyodor Dostoevsky’s The Brothers Karamazov and Uncle Tom’s Cabin by Harriet Beecher Stowe), or listening to great music (Josh Garrels, The Gray Havens, and Wovenhand are a few of my recent favorites). I’m also a movie buff and an avid baseball fan, so I don’t mind leaving the house for a movie theater or an exciting trip to Fenway Park to see the Red Sox play. I guess I’m a bit of a foodie as well, since I love finding new and different restaurants in my work travels and then bringing my wife back for a date night.

What was your favorite book as a teen or child?

I’ve always been an avid reader. According to my dad, I was reading books before I even had the alphabet straightened out. The one book I remember most as a child was a picture book called We Were Tired of Living in a House by Liesel Moak Skorpen (The 1969 version with the original illustrations is much better than the update they did a few years ago. It’s out of print now, but you can buy a used copy on Amazon for only $75!). I loved the different houses the kids built and how they came to realize the best house was the one they already had. I also had a series of abridged, illustrated classics that I devoured: Mark Twain, Rudyard Kipling, Robert Louis Stevenson, Charles Dickens, H.G. Wells, James Fenimore Cooper, Jonathan Swift, Herman Melville, and many more. I loved them all so much that I’ve been revisiting them through the unabridged versions as an adult.

As a teen, I graduated to more adult reading, going through Tom Clancy’s Jack Ryan books and also reading horror from Stephen King and Dean Koontz. I loved the sci-fi stories of Alan Dean Foster, and I was also really into crime novels by Elmore Leonard and Charles Willeford. Koontz and Leonard were probably my favorites of these, and had the most impact and influence on me as a writer, although Foster’s dry sense of humor crops up now and then in my writing.

Tell us three things about yourself that might surprise your readers.

People who meet me now are usually surprised to hear that I spent the 90’s playing drums in a handful of punk and indie rock bands, especially since I have no piercings or tattoos to show for it. Now I put my drumming talents to use on occasion in my church’s worship band (Crossway Church in Keene, NH. Please visit if you’re in the area!).

As someone who can bang out an 85,000 word novel, you might be surprised that I’m not much of a talker. I’m quite the introvert and have been since I was a child. I sometimes struggle with conversations, and am, far more often than I’d like to be, the source of awkward silences. But I’m happy to say that God is working on me, and while it’s still a struggle sometimes, I’m much better than I used to be. I’m thankful for His sanctifying grace.

As I struggle to come up with a third thing about myself, I’m suddenly fearful that I’m actually very boring as a person. I once rode a baby elephant when I was a kid. Does that count? I even have a photo of it, with this guy with a giant, curly afro leading the elephant around while I clung to its back. It was late 70’s/early 80’s so that afro was pretty stylin’.

What genre did you start out writing? Have you changed course? Why or why not?

The first story I ever wrote (at the age of 13) was about a kid struggling with his parents’ divorce. It definitely fell into the category of semi-autobiographical as my parents split when I was just an infant. Since then, most of my writing has fallen into the thriller/suspense genre, but I’m of the mind that a good story is a good story, regardless of its genre, and all good stories deserve to be told. So I’m definitely open to a change in course, depending on the random ideas that pop into my head.

While I was self-editing Solitary Man, I gave it to my friend Jerry, a pastoral assistant at my church at the time. He enjoyed the story, but pointed out numerous instances of latent error in the theology my character Jonathan preaches throughout the book. This was very humbling, especially since Jerry is actually around ten years younger than me. But I’m thankful for his critique, because it made Solitary Man a better book, and I had a chance to grow in my own knowledge and understanding of the Gospel. I’m so thankful for this faithful brother who is off now pastoring a church of his own in Ludlow, VT.

In all honesty, I think the best compliment was my publishing contract. After thirty years of writing, wondering with every rejection if I was actually just a talentless hack, I got my first “yes.” And now people I’ve never met are telling me how much they’ve enjoyed my writing. Validation and affirmation are healing balms to a writer’s soul.

Any other genres you’d like to try? If yes, what and why?

As I said, I’ve dabbled in other genres, and some of the ideas currently fighting for space in my head are different from anything I’ve ever written before. I’m currently working on a sequel to Solitary Man, but once that’s done, I’ve got an idea for a science fiction comedy/satire that I’ve been mulling over for years. I think I finally understand it and know how to write it, so it might be next on my list. Of course there’s also a marital drama kicking around in my head, so that could be next as well. On top of all that, I’ve been talking with my best friend Chris about collaborating on a picture book, with me writing and him illustrating (follow his work on Instagram @thecmbutton! He’s amazing!). As to the why, I find once an idea cements itself into my imagination, I have to write it, or it will torment me until I do (like that sci-fi story has). Story ideas are often like toddlers, constantly begging for attention.

If you could go back in time and do something differently at the start of your career, what would it be?

I’m turning 45 this year, but I’ve had the ability and talent to write for decades. If I could go back in time, I’d grab my 25 year old self and shake him, telling him, “Quit being lazy! Get yourself published! You have the ability, now do the work!” Procrastination is a career killer, especially for a writer.

What is the most important piece of advice you’d like to give to unpublished authors?

Keep working, keep trying. If you have talent, you will eventually get your “yes.” Solitary Man received around 20 rejections before Ambassador International offered me a contract. Also, read good authors, both classic and modern. Immerse yourself in good writing, and eventually, you’ll find yourself becoming a better writer as a result. To end, I’ll borrow a quote from Galaxy Quest: “Never give up, never surrender!”

Tell us a little about the story, Solitary Man: 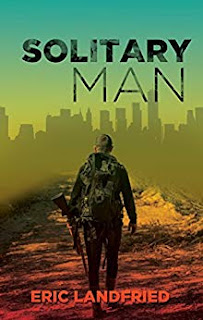 Ten years after a brutal war, cannibals and humans fight over the pieces of a hardscrabble existence. Former Navy SEAL Doyle has been prowling the broken remnants of a devastated America for years. Alone in an armored bus loaded with weapons and supplies, he’s grateful for his solitude. Being alone makes it easier to survive, as others can become a liability in the end of the world. But when a particularly brutal attack leaves Doyle in need of fuel and repair, he has no choice but to venture into the nearest settlement.

Jonathan has been pastoring a small church of Christians in that same settlement, but when he meets Doyle he sees an opportunity to expand his ministry. Cannibals have kept everyone from traveling, but Doyle’s armored transport and weapons bring hope to his small band of followers. The two men strike up a mutually beneficial bargain, but neither of them realizes that this journey will change them in ways they could never have imagined.
As they search for other believers, they must battle cannibals, militant atheists, and a mysterious super soldier. Doyle’s unbelief and Jonathan’s faith will collide in this action-packed wasteland. Solitary Man is a gritty, action-packed post-apocalyptic story with a solid, Biblical worldview.

And about you? Eric Landfried was thirteen years old when he realized he was a writer. Once
he had this realization, he grabbed a spiral notebook and began filling it with all the stories bumping around in his head. He was young and inexperienced, and therefore terrible, but the ideas kept coming and he kept improving as a writer. As a shy and withdrawn kid living in West Virginia, writing became the best outlet to express himself, and he exploited it as much as he could. As an adult, he wrote less frequently, usually due to his procrastinating nature, but the ideas never went away. Many of them are still with him, waiting to be introduced to the world. “Solitary Man” is Eric’s debut novel ready for introduction. Eric now lives in New Hampshire with his wife Kristen and son Nathan. He is excited to begin a new chapter in his life that involves doing something he has always loved, and he is eternally grateful for this opportunity to share his thoughts and ideas with the world.

For a chance to win a copy of Solitary Man, please leave Eric a comment. World-wide.

To purchase Solitary Man, please click on this link: http://ambassador-international.com/books/solitary-man/
Posted by Mary Ellis at 6:00 AM