What Are You Reading on Valentine's Day? 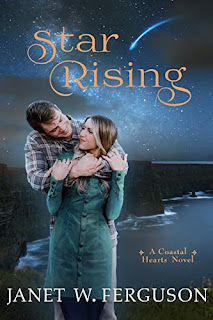 Since it's Valentine's Day, I thought I'd tell you about a couple of romance stories I've read recently. One is Janet Ferguson's Star Rising. It's a sweet romance perfect with lots of conflict, especially since the hero is convinced the heroine is trying to scam his mother. But can you blame him? Star is a recovering alcoholic and druggie. Here's the back cover copy:

Star Youngblood has always been a fighter–a necessity after her mother married a monster of a man. Now, she’s finally on the path to the stable life she’s always wanted. Her employer, Priscilla Kelly, is a sweet woman ravaged by rheumatoid arthritis, and Star will do anything to help her. Even if that means going toe to toe with Mrs. Kelly’s neglectful son.

After being betrayed on the mission field and devastated by the tragic death of his father, Paul Kelly gave up on God. He lives life on his own terms, biding his time as a corporate pilot until he can save enough money to begin his own flight school closer to home. His mother is all he has left, and he wants to be near her. He just didn’t expect her health to decline so quickly. When he discovers his mother has taken in a stray—a woman he’s not at all sure can be trusted—his protective instincts kick into high gear. Paul’s handled a lot of turbulence, but he’s never gone up against a force like Star.

You can purchase Star Rising at Amazon for $4.99!

Another book I've read lately is Secrets, Lies and Crawfish Pies. Isn't that a great title for a book! This one's a cozy mystery and it has the promise of a romance that I think will take place over the course of several books. Here's the back cover copy: 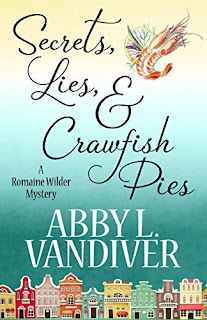 While this story is set in East Texas, it could be set anywhere in the South, especially my home state of Mississippi. Dr. Romaine Wilder returns kicking and screaming to her hometown of Roble, Texas. She thinks this is a temporary move, but her Aunt Zanne has other ideas. And what Aunt Zanne wants, Aunt Zanne gets.

When a body is found in the family funeral home, Romaine feels she has to get involved in solving the crime when Zanne becomes a prime suspect. I like that Romaine’s occupation isn’t your usual one for a cozy. I’m looking forward to more stories from Abby L. Vandiver!

So that's it for Valentine's Day for me. I'm making my honey Chicken Alfredo with sun-dried tomatoes and bow-tie noodles from scratch. I've never made it before and if it turns out well, I'll post the recipe on my next blog post. If it doesn't...

What will you do for Valentine's Day? Leave me a comment about the books or your plans and I'll enter you in a drawing for a $10 Amazon gift card!

Posted by Patricia Bradley at 3:30 AM

Email ThisBlogThis!Share to TwitterShare to FacebookShare to Pinterest
Labels: Abby L. Vandiver, Janet Ferguson, Patricia Bradley, What Are You Reading on Valentine's Day?