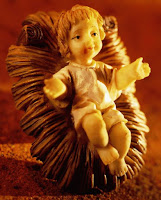 It was Christmas, and I wanted to be sure that our three-year-year old daughter understood what it was all about, so I bought an inexpensive crèche scene with little plastic figures that couldn't be broken if she wanted to handle them.


I warned her firmly that these were special figures, however, not toys to ride around in plastic cars or swing in the miniature Fisher-Price playground.


The Baby Jesus could be snapped out of the manger like a pop-it bead, but, while she was allowed to touch Him, He should always remain in the little stable house. She seemed to understand.


One day while Laurie was napping, I glanced at the crèche and noticed that Baby Jesus was missing from the manger.


Oh, no, I thought, He's probably tangled in the bottom of one of her plastic toy tubs, or encased in Play-doh, a fate shared by other tiny dolls. My effort to teach Laurie some reverence had been a failure.


When she approached the crèche later that day, I said, a little sternly, "I'm going to have to put it away. The Baby Jesus is lost."


"No He's not, Mommy," my little girl said. She pointed a tiny finger to the Mary figure, who stood with her arms adoringly outstretched. There, somewhat precariously balanced in His mother's arms, was Baby Jesus.


My daughter had understood where a baby belonged, even a baby who was God. Jesus was a person, who felt pain, need, hunger, and longed for loving arms, like every other human child. That’s how He understands what we go through in life, because He has been there, too.
Galatians 4:4 "But when the time had fully come, God sent His Son, born of a woman, born under law."
Posted by E.E. Kennedy at 5:50 AM 9 comments:

If you're wondering—yes—there is a sinister undercurrent to the Christmas season, aside from the real meaning of Christmas, of course. There are the weird traditions. Like mistletoe. The creepiest guys always manage to position themselves underneath what I like to call the "green menace," similar to whales filtering unsuspecting krill through their teeth. Like maybe if the creepsters stand there long enough, a girl's eventually going to cross their path. But smart girls always bypass the menace. Nothing good ever happens under the mistletoe. In fact, if you're not careful, you might even wind up with someone else's retainer in your mouth. That happened to a girl I know. She wasn't very smart. 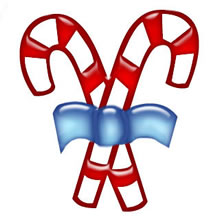 Think about it. Christmas is one big giant seasonal mystery waiting to happen. For instance, what’s inside all those packages? They’re wrapped up in shiny paper and tied up with bows and sitting right out in the open, just begging to be unwrapped. But only certain people know what's inside them. Like the select few who carry around the nuclear codes embroidered on the elastic band of their underwear. Top Secret stuff. Some kids employ the “accidental tear” technique where a gift happens to suffer an unfortunate rip or two from an errant mountain lion that somehow wanders into the house and decides to take a random swipe at certain gifts arrayed under the tree. If interrogated, said children will swear by this story. Then there are the stealthy re-wrappers. With the skill of a brain surgeon, they carefully cut the clear Scotch Tape with a razor. We’re talking professionals! Then, the rewrap artist carefully unwraps the gift, taking great care to make sure the wrapping paper is intact and not too wrinkly or crinkled to arouse suspicion. The bare gift is then noted, surveyed and approved or disapproved of, then rewrapped and set under the tree in the same spot.

And speaking of mysteries, what’s in Aunt Mabel’s turkey dressing? No one knows. One thing is certain, there's always a cat hair or two to be found. There are ingredients enveloped in bread cubes that no one, aside from a forensic investigator could identify. Are there crickets and earthworms folded into the warm clumps? Aunt Mabel was always a bit odd. AND she did give all the kids one of those Tequila lollipops with a worm inside last Christmas. Sure, it was a joke, but who’s kidding who? Aunt Mabel might be one of those arachnid-eaters, heralding the addition of insects to the American diet. Earthworm cookies. Grasshopper crunchies. Anything could happen with this woman. Anything. For all I know, the dried cranberry on my fork is something horrendous, something from another world. The insect world, specifically. 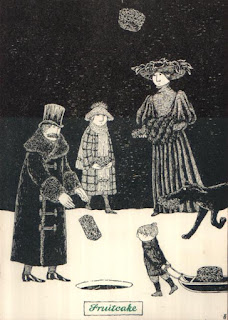 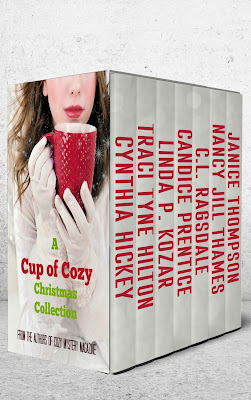 For that matter, what’s in the family fruitcake? Look inside and you’ll see. There are fluorescent fruits inside the dark mess of “cake,” fruits that I’m pretty sure would glow like Fukushima if I flipped off the light switch. Like those cups and saucers in the antique store around the corner. The cake is dark. Most dark cakes are all chocolat-y goodness. But not this kind of cake. It’s a cheat. A chameleon. You think it’s some kind of brownie, but it’s a cake composed entirely of some kind of dirt or clay mixed with sugar, but not too much sugar, just enough to make the thing still taste slightly brickish. Like a regular brick, but with alien fruit inside. Literally alien fruit from another planet and dropped to the earth via a saucer-shaped ship. When I snap my fingers, you will remember how your parents made you taste fruitcake when you were a kid. Oh, the humanity! One bite. Maybe a small slice. Somehow, your parents make themselves believe that your face will light up as you sink your teeth into the dank quagmire of the cake, and you’ll ask for another piece. Because fruitcake is so good, right? At some point long ago, your parents deluded themselves into believing they actually liked fruitcake. Was it mass hypnosis? Crowd-speak? Peer pressure? All I know is that somewhere, some slimy alien without tastebuds is having the last laugh. Maybe not a laugh. More like a chortle.


Anyway, I hope you have a merry, and somewhat mysterious Christmas. And if you need more mystery in your life, I'll mail you my slice of fruitcake.

Check out more of my Christmas books. Curl up with a nice cup of hot cocoa or cinnamon apple cider and relax! 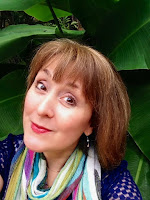 Linda Kozar, is a successful author of over 16 books, speaker, and radio host of Chat Noir Mystery & Suspense and Network Coordinator for the Along Came A Writer Network on BlogTalk Radio. Founder, former president, and current board member of Writers On The Storm, The Woodlands, Texas Chapter of the American Christian Fiction Writers, she was the recipient of ACFW’s Mentor of the Year award 2007. She is currently a PR Director for the Christian Authors Network and is a member of Chi Libris, ACFW, RWA, AWSA, and CAN. Linda and her husband of 28 years, Michael live in The Woodlands, Texas and enjoy spending time with their two grown daughters, wonderful son-in-law and their spunky Jack Russell Terrier, Gypsy. 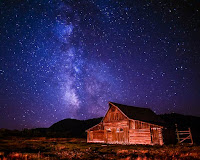 The young couple knew the long trip would be difficult, but it was the Depression, and although there was no work in the small Texas town where they had started their married life, the husband had heard of work in California. So they packed up their car, praying that it would hold up for the trip. The wife’s father slipped a couple of crumpled bills into her hand and said, “In case of emergency, Honey.” Her mother stood nearby, twisting her apron, obviously worrying about her daughter but just as obviously trying not to show it.

The couple used up the last of the daylight driving. They had reached deep West Texas when they realized they needed to stop for the night. “We can’t spare the money for a hotel,” the husband said. “I’m going to see if the folks at one of these farms will put us up for the night.”

They pushed on between pastures marked by sagging barbed wire, the road a winding black ribbon in the flickering yellow headlights. At last the driver spied a cluster of lights in the distance. “I’ll try there.”

The man who came to the door wore overalls and a gray, long-sleeved undershirt. He didn’t seem to take kindly to the idea of this couple spending the night, but his wife came up behind him and said, “Oh, can’t you see she’s pregnant. The hands are out in the north pasture with the herd, and the bunkhouse is empty. Let them stay there.”

In the middle of the night, the young husband was awakened by his wife’s cries. “I’m in labor.”

He did. In a few minutes, the rancher’s wife bustled in, laden with towels and blankets. “Just put that down,” she said to her husband, who trailed her carrying a bucket of hot water in one hand. “Then you two men get out.”

Soon, the men grew tired of waiting outside, so the rancher grudgingly invited the stranger into the kitchen. They’d almost exhausted a pot of extra strong coffee when they heard a faint cry. Then the rancher's wife called, “You men can come back now.”

The two men were halfway to the bunkhouse, following the faint light of a kerosene lantern, when three weary cowboys rode up and climbed off their mounts. “We saw lights on here. What’s going on?”
“Come and see,” the young husband said. And they did.

When he saw the mother holding a wrinkled, fussing newborn close to her, the gruff old rancher turned to his wife and said, “Well, Mother, I’m glad you talked me into letting these folks stay.”

“We had to,” she said. “It was a wonderful gift for me, seeing that little baby born. Who knows? Maybe he’ll grow up to be someone special.”

Now imagine that the scene wasn’t West Texas. It was Bethlehem. It didn’t take place in a bunkhouse. It occurred in a stable. And it wasn’t just a baby—this was God’s own Son. Does that make it more real to you? I hope so.

During this season, as you think about Jesus’ birth, don’t put him in spotless white swaddling clothes in the middle of a Christmas card. Picture him in the most humble surroundings your imagination can conjure up, the Son of God Himself in a diaper, born to give each of us the best gift we could ever imagine.

Merry Christmas.
Posted by Richard Mabry at 1:00 AM 12 comments: