The Difference between a suspense and a mystery

Hi everyone, Lynette Eason here. I was trying to think of a topic for today's post and thought I'd answer a question that I got the other day. What's the difference between a mystery and a suspense? Below are sixteen suggestions. I was wondering if you agree with them. Do you have any differences that you would add? Any you disagree with? Leave a comment and I'll put you in a drawing for my newest release, When A Secret Kills to release the first of May. 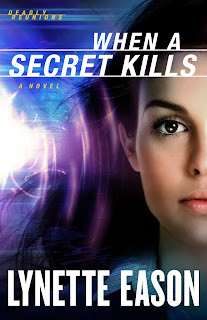 She's come home to put a killer behind bars.
But the killer plans to put her six feet under.

Investigative reporter Jillian Carter knows it’s time to put the past to rest. She’s tired of looking over her shoulder, letting a killer go free. She’s no longer the scared kid who changed her name and disappeared. Now, no matter what the cost, Jillian must do what she is trained to do—find the truth and expose it. And the truth is that Senator Frank Hoffman committed murder ten years ago—and Jillian watched it happen.
Didn’t she?
Get ready for the spine-tingling, nail-biting conclusion to the explosive series.
“A fabulous read! Eason is a master at romantic suspense. I gobbled up the novel in two days and promptly ordered the first two books in the series. Highly recommended!” – Colleen Coble, author of the Rock Harbor and the Hope Beach series.
“Fast-paced romantic suspense with compelling characters who pull you into the story and make you care what happens to them.” – Margaret Daley, author of Scorned Justice and the Men of the Texas Rangers series.
“Clear the runway and fasten your seat belts. This novel captures the reader in the first line and doesn’t stop until the end. Eason has created a suspense-packed story that captivates.” – DiAnn Mills, author of The Chase and The Survivor.

Sixteen Differences between Mystery and Suspense


A mystery concerns itself with a puzzle. Suspense presents the reader with a nightmare.

A mystery can be likened to a myth. Suspense is more like a fairy tale.

In a mystery the hero or heroine already has the skills he or she needs to solve the puzzle. In suspense, he or she must learn new skills to survive.

A mystery usually takes place within a small circle of friends. The hero or heroine of a suspense novel often finds him or herself thrust into a larger world.

Readers of mysteries are looking for clues. Readers of suspense are expecting surprises.

Mystery readers expect a series. Those who read suspense know a book can be a one shot.

Posted by Lynette Eason at 8:10 AM